We all know about “The First Man” on the Moon. However, when Neil Armstrong took his historic step on the surface of the Moon, he was wearing a bio-belt that was fitted with a Cicoil engineered Biomedical Harness. Without this important piece of the Space puzzle, who can say that the Moon landing would have taken place on July 29, 1969.

Once NASA was established in 1958, the Race for Space between the USA and Soviet Union began. If the United States was to send a man into orbit, walk in Space or to land on the Moon, then vital signs of the astronauts, such as heart rate, blood pressure, respiration, body temperature, and pulse rate would need to be recorded and evaluated.

Unlike the Mercury and Gemini missions that focused on historical data, the Apollo missions to the Moon would require continuous monitoring of the astronauts during all intravehicular (IVA) and extravehicular (EVA) activities. Due to the uncertainties associated with the effects of Space flight and normal bodily functions, biotelemetry technology would enable flight surgeons at the Ground Command Center in Houston to identify problems in real time and provide quick solutions.

NASA would need a lightweight, bioinstrumentation harness that could reliably function when continuously exposed to human movement, vibration, zero gravity, and mechanical stress. The cable would need to be flexible, be routed in multiple directions and function well in tight space, especially once placed within the IVA and EVA bio-belts for the Apollo Program flights.

Unfortunately, this task was considered almost impossible due to the difficulties of working with stiff and bulky round cable, or even loose wires that would not be able to survive constant physical abuse. However, NASA was fortunate to have a cable supplier of specialty molded flat cables who could hopefully provide a flexible solution to an inflexible problem.

Just as they did while developing the Ultra-Flex IDC Flat Ribbon Cable for IBM and the mainframe computer industry, Cicoil’s engineers were tasked by NASA to solve this problem. Fortunately, they figured out a way to not just encase twisted pairs of multiple AWG sizes within the same thin flat cable, but to precisely control the spacing between each. By creating this durable cable package, electronic interference and crosstalk would be prevented, and the fully terminated harness would provide uninterrupted signal integrity during the harsh rigors of Space flight.

Unlike, the standard straight ribbon cable design, Cicoil also developed a concept of forming the cable into various shapes that would save additional space, protect the inner wires during bodily movements and not give up any signal degradation during the entire Space mission. Cicoil was also able to replace stranded wire with extra fine wire into their designs, which would allow the cables to perform exceptionally well in tough environments, but could be formed in 90° angles and even folded over. Up until this time, the concept was not considered a possibility. However, Cicoil’s out-of-the-box thinking engineers were once again able to provide yet another innovative solution. 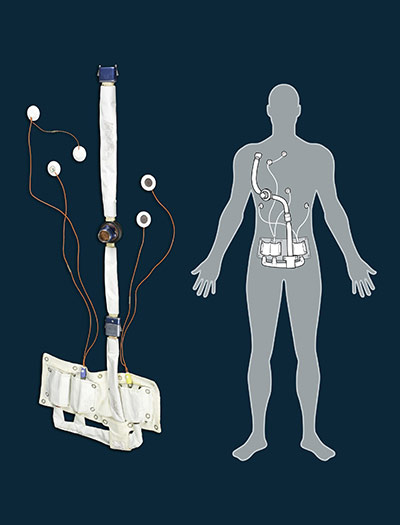 To help prepare for the Apollo 11 Mission to the Moon, the 26-in. long electrical biomedical harness was worn by the astronauts during the Apollo 9 Flight (Commander Jim McDivitt) on March 3, 1969 and the Apollo 10 “Dress Rehearsal” Flight on May 18, 1969. The “Bio-Harness” was worn underneath the Intra-Vehicular Constant Wear Garment when in the Spacecraft, and under the extra-vehicular (EV) pressure suit during Spacewalk activities.

On July 20, 1969, the Cicoil Bio-Medical harnesses made history by being an integral part of the Historic Apollo 11 First Moon Landing. The Intravehicular Harnesses were worn by Apollo 11 Astronauts on board the Columbia Command Module during the Lunar orbit and the “Eagle” Lunar Module that landed on the Moon’s Surface.

The Cicoil Extravehicular Bio-Medical Harness was worn by Apollo 11 Commander Neil Armstrong as he took his historic “First Small Step for Man, and One Giant Leap for Mankind,” and was also worn by Eagle Lunar Module Pilot Buzz Aldrin as he took the famous “2nd Walk.”

The Cicoil assembly successfully enabled continuous monitoring of all vital signs for each Apollo 11 astronaut during flight, orbit, Moon walk operations and reentry back to Earth. The flawless operational performance of Cicoil’s Bio-medical Instrumentation and Telemetry Harness designs were, in NASA’s words, “Vital to the successful achievement” of these history-making flights.

In addition to helping NASA put a man on the moon, Cicoil’s Biomedical Harnesses were also “there” for the First American to Travel in Space in 1961 (Alan Shepherd), the First American Orbit of the Earth in 1962 (John Glenn), the First Space Walk in 1965 (Edward White) and all Space Shuttle Missions.

The mission critical success of biotelemetry in Space was just not beneficial to the Apollo Program, it was also beneficial to all of mankind as well. Today, biomedicine is now found in almost all intensive care units, emergency rooms and critical care units throughout the world, and Cicoil is proud to have played an instrumental part in helping to make this “Giant Leap” in medical technology a reality.

Cicoil has been a partner to NASA since its inception in 1958.

Cicoil is the only company in history to develop and manufacture a Biomedical Harness that was used successfully on another planetary body — the Moon.

Cicoil has proven internal systems and manufacturing processes that meet all Spaceflight requirements.

When Neil Armstrong stepped onto the surface of the Moon, he wore the world’s first wireless biotelemetry system, which was helped made possible by Cicoil’s innovative bio-medical harness design concept.

Through the use of Cicoil’s bio-harnesses on the Apollo Space Missions, the first Intensive Care, Emergency Room and Critical Care Unit monitoring systems are introduced.